An art party with some thousand guests in the garden of the Ambassador marked the end to an extensive Sweden-India Nobel Memorial Week, in which seminars, round tables, lectures, a food festival, performances, quizzes, and exhibits had featured Indo-Swedish food for thought, body and soul.
Guests of honor were the Indian Minister of State for External Affairs, Ms. Praneet Kaur and the Swedish Minister for and Energy, Ms. Maud Olofsson. 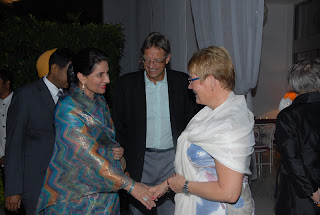 The Ministers, along with other guests were served Indo-Swedish entertainment, by Swedish Idol Sibel, the immensely popular Bombay Vikings and the cover band Black Slade. Bombay Vikings’ lead singer Neeraj Shidhar, lived in for many years and the performance was his gift to what he calls his “father land”. 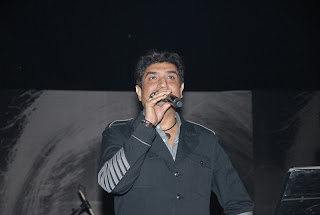 The Ambassador of Sweden to , Mr. Lars-Olof Lindgren after the performance awarded Neeraj Shidhar a glass sculpture with a hand etched copper Dala Horse by Atul Bakshi, specially crafted for the Embassy of Sweden. 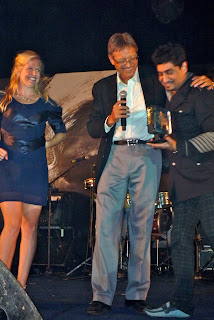 To capture the theme of the Sweden-India Nobel Memorial Week 2010 – creativity and innovation – the theme for the party was art. The art, like the entertainment and the food, was chosen to underline the Indo-Swedish cooperation. Indian glass artist Atul Bakshi, displayed his works together with Swedish glass artists Bertil Vallien and Kjell Engman. Atul Bakshi had for the party created an 8 feet long sculpture called Mor Matsya, in which Swedish innovations were showcased along with iconic logos of Swedish companies and traditional Swedish artefacts. The name of the sculpture is derived from the Swedish word for mother and the Sanskrit word for fish, which is the first avatar of Vishnu, the preserver. 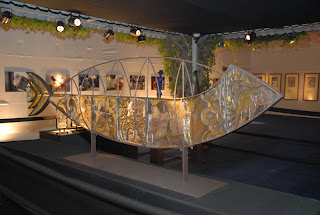 Also on display was an art photo exhibit, in which the finalists of the photo competition Swedish Innovations – Indian Interpretations were displayed. The winning photograph “Acceptance of Technology Irrespective of Age” featured the Bluetooth. 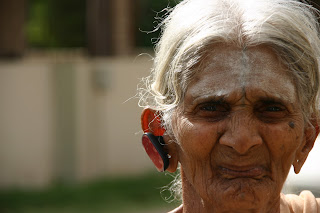 The photographer Barkath Ali Khan was presented with a large flight ticket from Turkish Airlines at the party. 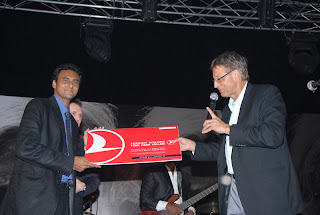 This coming spring, Mr. Khan will go to to visit the in Gothenborg, and Fotografiska in .
The extensive program and the individual events of the Sweden-India Nobel Memorial Week 2010 were featured extensively in Indian media, making the efforts of the Embassy and the fifteen partner companies and organizations well worth wile.
Posted by Sweden-India Nobel Memorial Week at 1:08 PM No comments:

Some of many Swedish Innovations